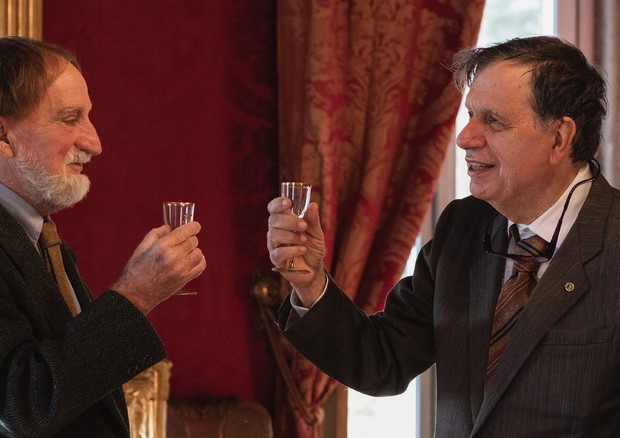 PHOTO
The toast of the president of the Accademia dei Lincei, Roberto Antonelli, and of the vice-president Giorgio Parisi, with glasses that belonged to Alfred Nobel (source: Francesca Maiolino) © ANSA / Ansa

Nobel toast at the Accademia dei Lincei, dedicated to research: on the occasion of the awarding of the most coveted scientific prize to the physicist Giorgio Parisi, a set consisting of a bottle and crystal glasses that belonged to Alfred Nobel was donated to the Academy. The donation was made by Maria Mercedes Zangari Parodi and her son, the theoretical physicist Gianluigi Zangari del Balzo.

The service, with the initials of Alfred Nobel in gold, comes from the villa in Sanremo where the inventor of dynamite had retired in 1890 for health reasons, where he had built a laboratory for his research and where he died in 1896. The The villa was then purchased with all its furnishings by Juan Parodi, the donor’s grandfather, and in the 1970s it became the property of the Liguria Region, under the protection of the Swedish Embassy in Italy. On that occasion the laboratory was rebuilt and the living rooms and library were restored with the original furniture.

“The Academy is honored with such a prestigious gift, testimony to the subtle bond that unites minds and spirits intellectually curious and engaged in research”, commented Giorgio Parisi, president of the class of Physical, Mathematical and Natural Sciences and vice president of the Academy of Lincei. “It is with emotion that we toast to the future of culture and research, ideally close to those who wanted to dedicate their whole life to them. We will treasure this gift with gratitude”, thanked the president of the Accademia dei Lincei, Roberto Antonelli.