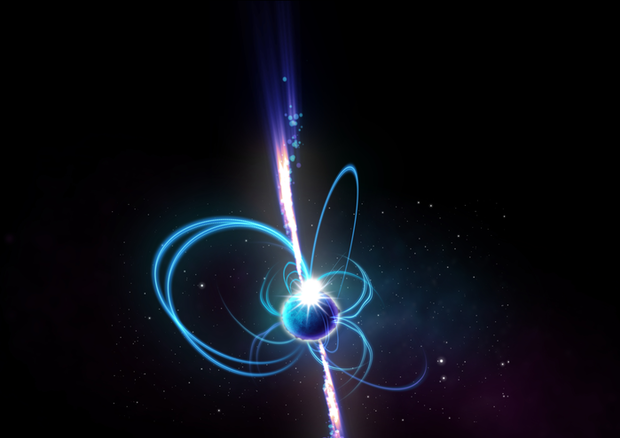 Discovered a cosmic object but seen so far: it is a sort of lighthouse that emits very intense flashes of radio waves at regular intervals, of about 20 minutes. Observing this anomalous cosmic source, published in the journal Nature, he was a group of astrophysicists from the International Research Center for Radio Astronomy at Curtin University in Australia.

“This is a type of radio impulse never encountered so far”, Andrea Possenti, of the National Institute of Astrophysics (INAF) in Cagliari, told ANSA, commenting on the research. The anomalous impulses discovered by the Australian researchers are packets of radio waves, very intense and several tens of seconds long, which are repeated at regular intervals of just over 18 minutes. “For decades – said Possenti – we have known and studied pulses similar to these, which we believe are produced by very compact stars known as pulsars. In general, however. Pulsars emit much shorter and much faster pulses, lasting between a few milliseconds and a few seconds. A source like the one discovered in Nature is something very different. ”

The anomaly, according to the authors of the research, could prove the existence of a hitherto unknown subfamily of pulsars, particularly ‘slow’, or be produced by a magnetar, ie neutron stars characterized by very intense and still little studied magnetic fields.

Curiously, the observed signal is very intense, yet it had so far escaped the detections. “This – – Possenti noted – could be due to two reasons: one ‘technical’ and one ‘practical’: given that the pulsars known to us have very rapid periods and impulses, all the instruments that look for these signals focus on intervals. much shorter. Added to this is the problem of interference. Radio waves are widely used in human activities and therefore distinguishing an anomalous signal coming from the sky is actually very complicated “.

The discovery of these new sources now opens up the possibility of hypothesizing new experiments and observation campaigns to hunt for these new cosmic objects.