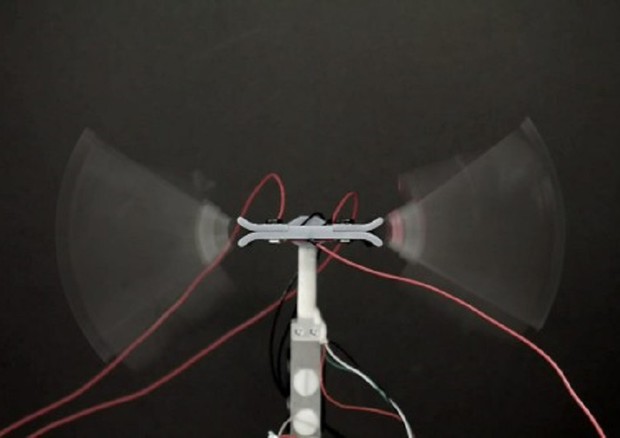 They flap their wings just like insects, without motors or gears: they are the new microbots developed by researchers from the British University of Bristol and described in the pages of Science Robotics. The new solution of wings moved by artificial ‘muscles’ opens up the real possibility of using flying microbots for environmental monitoring or use in hazardous environments for longer and over long distances.

Flying by somehow replicating the techniques used by insects has always been one of the great challenges of robotics and most of the concrete solutions adopted so far were forced to use motors or gears, all very complex elements with a high rate of wear. Taking inspiration from bees, British researchers have now managed to develop a microdevice that can flap its wings without rotating parts but using only electric fields and which has been renamed Laza (Liquid-amplified Zipping Actuator).

The device consists of a metal fin which, placed between two electromagnets, is made to oscillate up and down, alternating the fields produced by the two magnets. A simple method, very similar to how insects work, which allows you to flap your wings over a million times and make microrobots fly at high speed, up to 70 centimeters per second. Performances that, for the same weight, are defined by researchers as better than those produced by the muscles of insects. “With Laza – said the coordinator of the study, Jonathan Rossiter – we have taken an important step towards autonomous flying robots that could be as small as insects and perform various types of tasks”. Applications in many fields, from environmental monitoring to the search for survivors in destroyed buildings or environmental disasters to even aid in agriculture as pollinating robots.