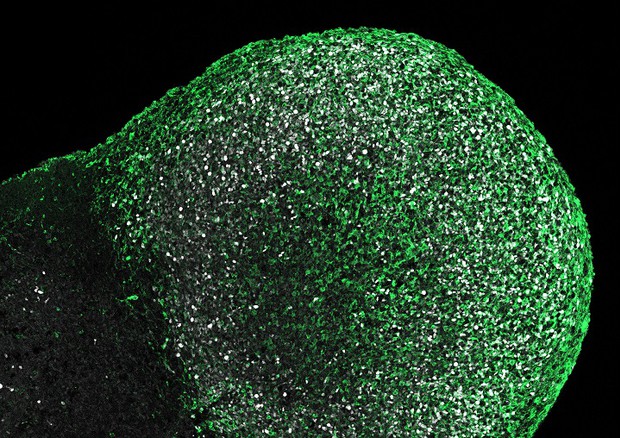 The tumor grown on a brain organoid grown from cells of a patient suffering from tuberous sclerosis (source: © Knoblich / IMBA) © ANSA / Ansa

Miniature brains grown in the laboratory from patients’ cells allow us to reveal the origin of neurological diseases that are still incurable and otherwise difficult to study in animal models: this is the case of tuberous sclerosis, a rare disease that has so far been erroneously considered genetic and which instead is due to an altered development of cells present only in the human brain and not in that of other animals. This is demonstrated by a study published in Science by the Institute of Molecular Biotechnology of the Austrian Academy of Sciences (Imba).

Tuberous sclerosis occurs in many patients with severe episodes of epilepsy, autism and learning difficulties. From a morphological point of view, it is characterized by the presence of benign tumors and lesions of the cerebral cortex called ‘tubers’. So far these alterations have been attributed to a predominantly genetic cause, but the study of mini brains in test tubes (cerebral organoids) shows that it all stems from a developmental problem: “the excessive proliferation of a specific cell type of the human brain,” he explains. the first author of the study, Oliver Eichmuller. These progenitor cells, called ‘Clips’, are found only in the developing human brain but not in other animals such as the mouse. “Our study – adds the researcher Nina Corsini – shows that the human brain is much more complex than that of most animals”, and perhaps this is precisely where its greater vulnerability to disease lies.

The IMBA researchers hypothesize that this argument may also apply to other neuropsychiatric diseases, to some neurodevelopmental disorders and to some malignant brain tumors. “Our findings – concludes Jurgen Knoblich – could also apply to other diseases that are currently without cure”.