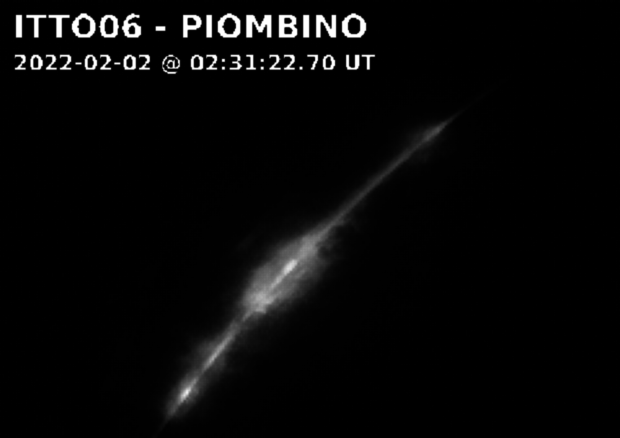 Published the first images of the brilliant meteor that illuminated the sky between Corsica and Tuscany on the night of February 2, being sighted from Lazio to Lombardy and Val di Susa. Its passage, around 3:31 am, was filmed by seven cameras of the Prisma network (First Network for the Systematic Surveillance of Meteors and Atmosphere), which belongs to the National Institute of Astrophysics (Inaf).

The fireball, explain the Prisma experts, crossed the sky in a south-easterly direction in the area of ​​the Tuscan archipelago. Appeared off the coast of Corsica at over 80 kilometers of altitude, with a speed of more than 14 kilometers per second, the celestial body was subjected to numerous flares and fragmentations (at least five), and died out at about twenty kilometers a south-south-east of the island of Montecristo, at an altitude of about 40 kilometers.

Its passage was intercepted by seven Prisma chambers: the Tuscan ones of Piombino, Elba, Chianti, Montelupo Fiorentino and Navacchio, that of Monteromano in Lazio and that of Cecima near Pavia.

Animation of the passage of the fireball taken from the Prisma network chamber in Piombino (source: Prisma-Inaf)

“The event was particularly brilliant, so much so that it was also spotted by Lazio, Emilia and Lombardy”, explains Daniele Gardiol of the Prisma network. even from three Catalan and Valencian sensors of the Spanish Meteor Network and a witness of excellence in Val di Susa, the well-known meteorologist Luca Mercalli “. Any remaining fragments would have fallen into the sea.