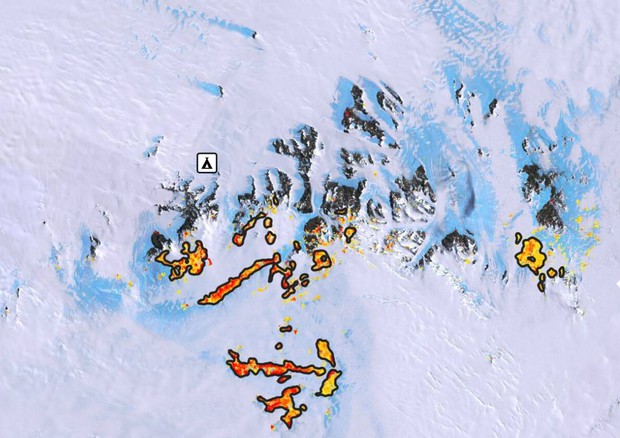 In Antarctica hunting for meteorites guided by artificial intelligence: according to a study by researchers from the Free University of Brussels and published in Science Advances the Antarctic ice houses 300,000 meteorites and an algorithm has drawn the treasure map with the places where to find them.

About 2 thirds of all meteorites discovered on the planet come from Antarctica and this is simply due to the fact that recognizing dark stones in snow is much easier than doing it on stony ground or where human activity is strong. When a meteorite falls on the Antarctic snowpack it generally penetrates deep or is gradually covered by snow but the slow and constant movements of the ice tend to move them and sometimes bring them back to the surface. Most of the meteorites are transported towards the sea but when the ice meets a mountainous formation, the materials of the deeper layers are brought back to the surface, including the dark meteorites that easily stand out on the white mantle. It is no coincidence that the vast majority of Antarctic meteorites, about 45 thousand, have been found in the vicinity of mountain ranges. Knowing these dynamics, the researchers then developed an algorithm that, enriched with information on the sites of discovery of most of the meteorites discovered so far in Antarctica, is able to simulate the movement of meteorites that have fallen in the region. The result was an available treasure map online where the greater the chances of finding these cosmic stones that can tell so much about the past of the Solar System. In total 600 more or less large areas, most of which have never yet been explored and which, according to the researchers, could house almost 300,000 meteorites yet to be discovered.