Observed in the heart of the Milky Way enigmatic filaments: they are a thousand, they are up to 150 light years long and could be due to the magnetic fields generated by the black hole at the center of the galaxy. Observing them for the first time in detail is the powerful MeerKAT radio telescope network, the data of which were analyzed in research coordinated by the Northwestern American University and the South Africa Observatory (Saao). The data are online on the arXiv platform, which welcomes articles awaiting examination by the scientific community, and in the process of being published in The Astrophysical Journal.

The filaments discovered now are, according to the researchers, the traces due to the magnetic fields produced by the galactic core where there is also a large supermassive black hole, something similar to the magnetic field lines visible when iron dust is placed near a magnet. . 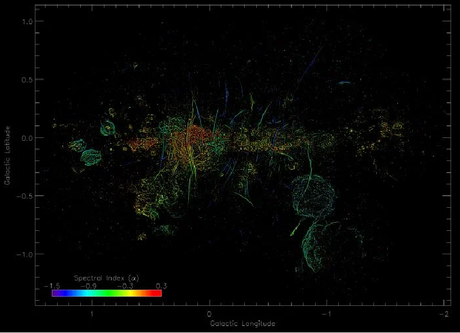 Spectroscopy of the structures observed at the center of the Milky Way (source: Northwestern University / SARAO / Oxford University)

“The new images of the center of the galaxy collected by MeerKAT are extraordinary and allow for the first time to observe in unprecedented detail these filaments, visible like brushstrokes, which we believe to be the traces of the magnetic fields produced in the galactic core,” he said. ANSA the radio astronomer Grazia Umana, of the National Institute of Astrophysics (INAF) in Catania.

The center of our galaxy is a region surrounded by countless large clouds of dust and particles and, precisely because of these characteristics, it is particularly difficult to study and observe. One of the few methods of investigation is the observation of radio waves, wavelengths that are more easily able to penetrate through interstellar dust. “With MeerKAT, which went into full operation a few months ago, we have for the first time a very powerful instrument to observe the galactic center”, said the researcher. “These images clearly demonstrate this and many other very interesting discoveries are about to be published in the coming months.”

MeerKAT is a network made up of 64 parabolas with a diameter of 13.5 meters, located in the South African desert of the Karoo and conceived as a forerunner of the future SKA (Square Kilometer Array) radio telescope. In the next few years the enhanced version is expected, called MeerKAT +, in which Italy also participates, with the Inaf.