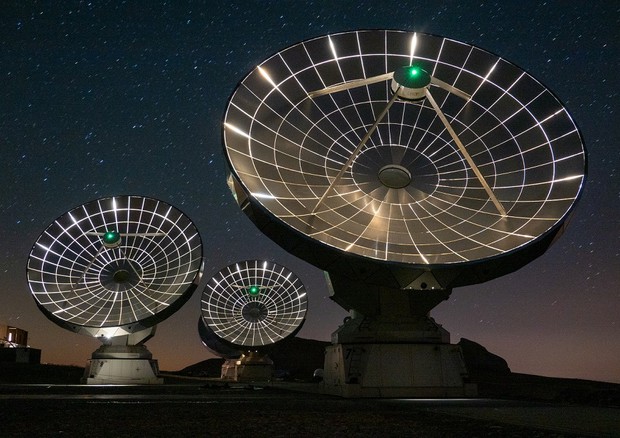 PHOTO
The antennas of the Noema observatory (source: IRAM, A. Ramboud) © ANSA / Ansa

The ‘fever’ of the baby universe passed quickly after the Big Bang: this is demonstrated by the temperature of the cosmic microwave background radiation, measured for the first time in an extremely remote period, equal to 880 million years from the Big Bang . This was done in an unprecedented way, using the shadow of a cosmic cloud of water, thanks to the Noema interferometer (NOrthern Extended Millimeter Array) in the French Alps. The result is published in Nature by a team of astronomers led by Dominik Riechers of the University of Cologne, which was also attended by Roberto Decarli of the National Institute of Astrophysics (INAF) in Bologna.

The cosmic microwave background radiation is what remains of the energy released by the Big Bang and is continuously cooling since its emission due to the expansion of the universe. The current standard model describes how this cooling should take place, but this has only been directly confirmed in relatively recent cosmic epochs.

To go back in time, the discovery of a cloud of cold water, associated with a massive galaxy with a high rate of star formation (HFLS3) already present in the young universe, when it was 880 million years old, was fundamental. “The water cloud casts a shadow on the cosmic microwave background, which has never been seen before,” explains Decarli. “The shadow appears because the colder water absorbs the warmer microwave radiation. on its way to Earth and its darkness reveals the temperature difference. Since the temperature of the water can be determined by other properties of the galaxy in which it is located, the difference reveals the temperature of the fossil radiation from the Big Bang ”.

“This discovery – underlines Decarli – shows us that the universe in its infancy had some rather unusual properties that no longer exist today”. It could also help shed light on dark energy that affects the cosmic expansion and cooling rate of the universe.